Analysing electromagnetic systems and processes that encompass static and low-frequency ranges requires a powerful and flexible simulation tool. The AC/DC Module add-on to the COMSOL Multiphysics® platform provides you with a wide range of modelling features and numerical methods for investigating electromagnetic fields and EMI/EMC by solving Maxwell’s equations.

The multiphysics capabilities of the COMSOL® software make it possible to investigate the impact of other physical effects, such as heat transfer, structural mechanics, and acoustics, on an electromagnetics model.

What You Get with the AC/DC Module

The AC/DC Module includes the tools necessary for modeling:

Included in the AC/DC Module: 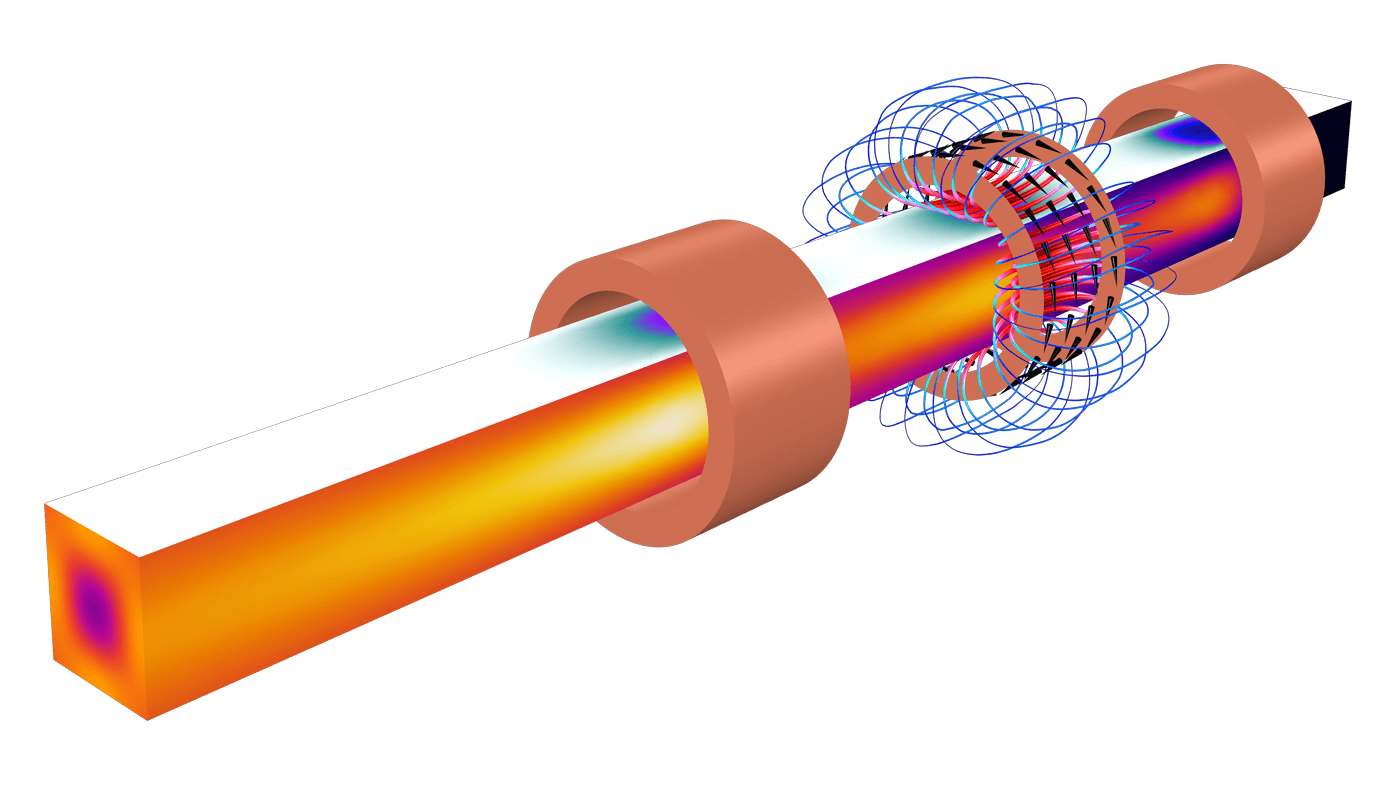 Explore the features and functionality of the AC/DC Module in more detail by expanding the sections below.

Predefined Physics Interfaces for Static and Low-Frequency Modelling
Boundary Conditions for EM Modeling
EM-Specific Modeling Tools
Nonlinear Materials and Customization
Automated Meshing and Numerical Methods for EM Field Models
Postprocessing and Visualisation for Any EM Field Quantity
Create Specialised Applications from Models
Interfacing Products for Synchronizing MATLAB®, CAD Software, and Microsoft® Excel® with COMSOL Multiphysics®
The AC/DC Module comes with a selection of physics interfaces for setting up analyses in a number of application areas, such as electrostatics, electric currents, magnetostatics, and time-varying electromagnetic fields including induction effects. You can form combinations of these interfaces to get more general modelling capabilities.

Physics interfaces in the AC/DC Module: 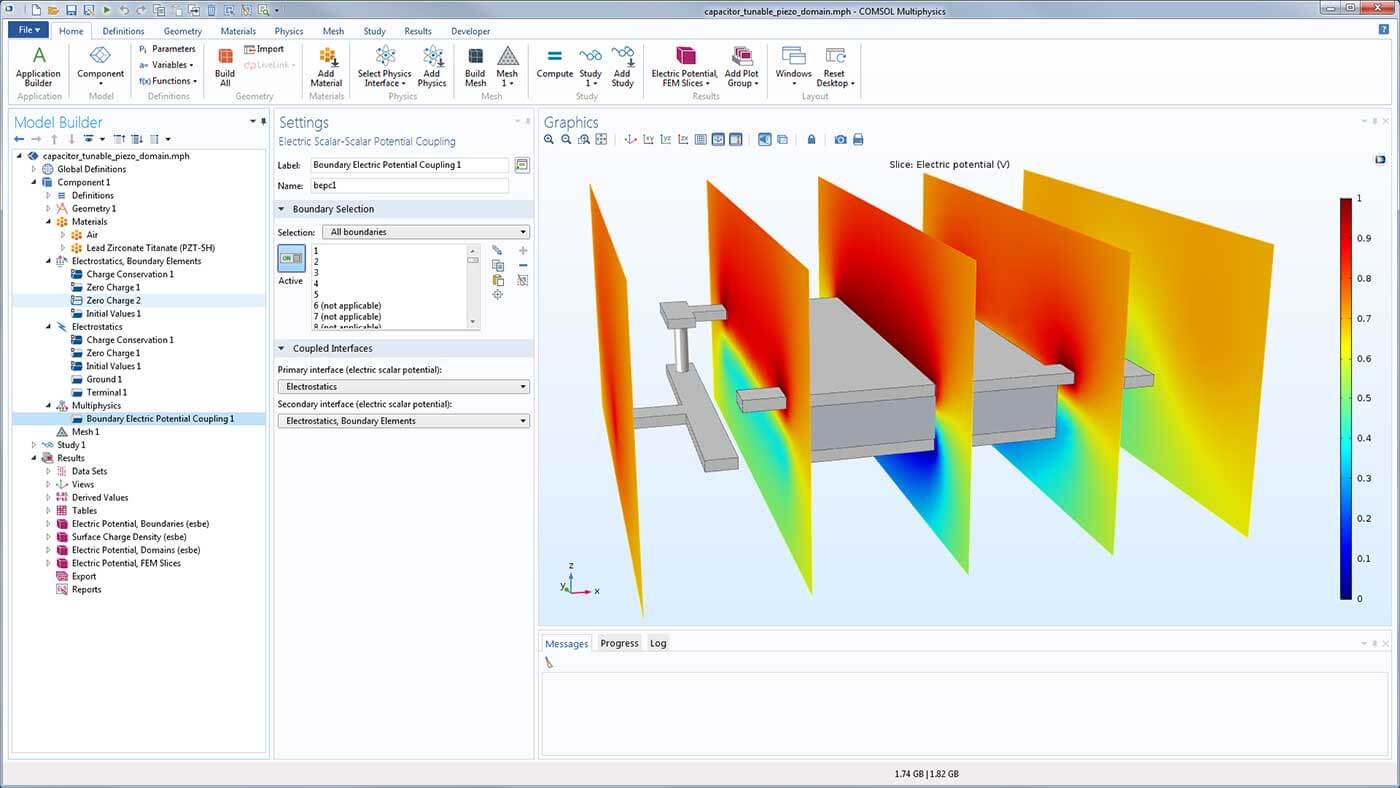 In addition to fundamental boundary conditions — such as potentials, currents, charges, and field values — a range of advanced boundary conditions are included. Some of these, including the Terminal, Floating Potential, and Circuit Terminal boundary conditions, are used to extract equivalent circuit parameters from a 2D or 3D model such as resistance, capacitance, inductance, and impedance values and matrices.

Boundary conditions in the AC/DC Module: 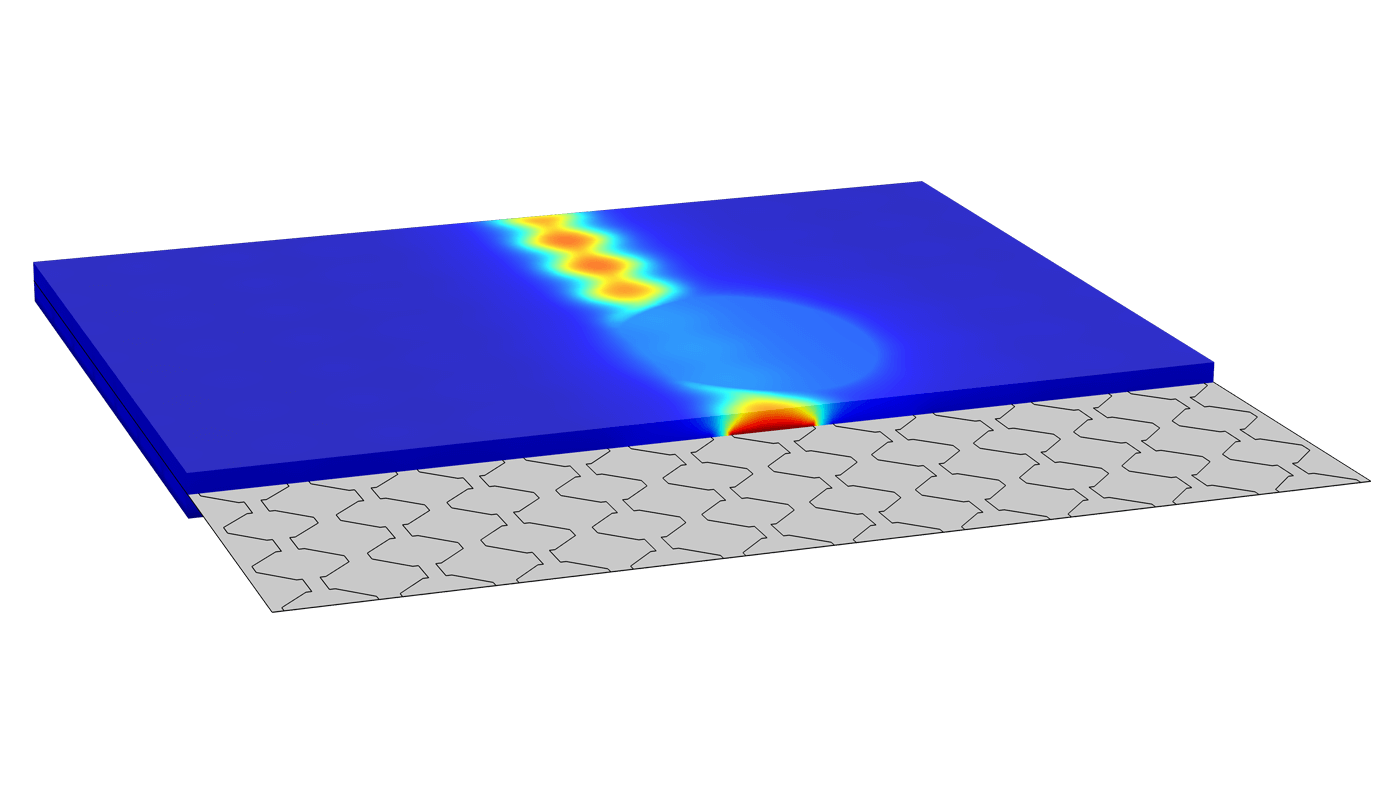 For modelling very thin structures, you can use shell formulations that are available for direct currents, electrostatics, magnetostatics, and induction simulations. A specialised user interface is available for modelling direct currents in shells with multiple layers. Electromagnetic shell modelling makes it possible to replace the thickness of a thin solid in a CAD model with a physical property of a surface resulting in a much more efficient representation.

Specialised coil features can be used to greatly simplify the setup process of coils for a range of magnetostatics and low-frequency electromagnetics models. In many such applications, the magnetic field is generated by electric currents flowing in conductive materials; for example, cables, wires, coils, or solenoids. The specialised coil features are used to easily model these structures and to translate lumped quantities, like currents and voltages, into distributed quantities, such as current densities and electric fields. Single-conductor and homogenised multiturn coils can be defined in full 3D or 2D axially symmetric models. A part library, with fully parametric coil and magnetic core shapes, enables faster model setup when analysing transformers, inductors, motors, and actuators.

Using the built-in interface for rotating machinery, it is easy to model motors and generators. You can, for example, understand the behaviour of induction or PM motors, particularly by capturing the eddy current losses that occur within the magnets. In any model that is used for simulating electromagnetic motion, you can examine the rigid or flexible body dynamics under the influence of magnetic forces and torques, induced currents, and mechanical load and spring configurations.

A general-purpose moving mesh functionality makes it possible to model linear motion. This is important for understanding the operation of components involving plungers, such as in magnetic power switches and general actuators. 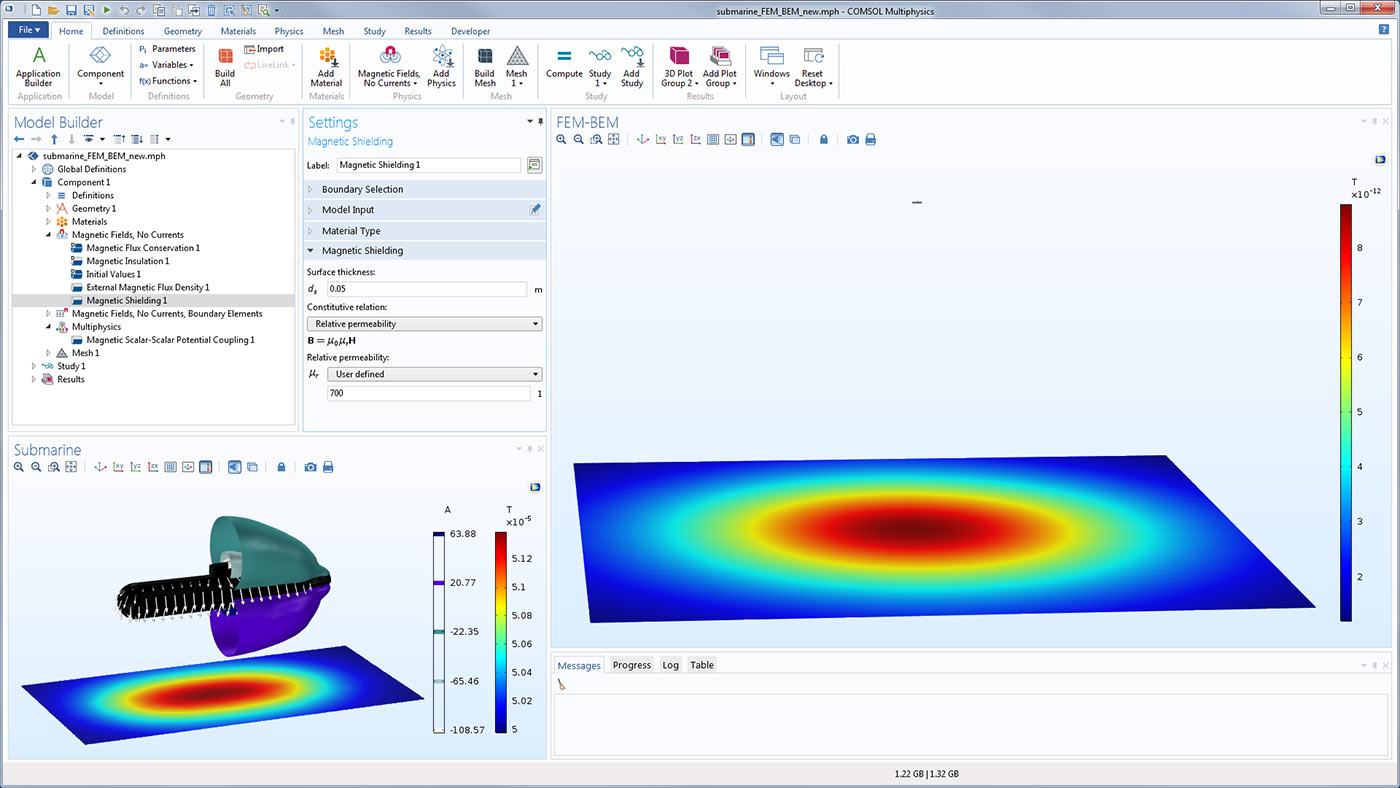 You can choose from a large material database that includes:

In addition, you can use materials from libraries made available by other add-on products.
Materials can be spatially varying, anisotropic, time-varying, lossy, complex-valued, and discontinuous. It is easy to expand the scope of a simulation with little additional work. You can define your own materials using mathematical expressions, look-up tables, or combinations of both. Alternatively, you can use externally defined materials written in C-code.

More generally, by using the equation-based modelling functionality, you can modify boundary conditions, material properties, and equations to customise a simulation for your specific needs. 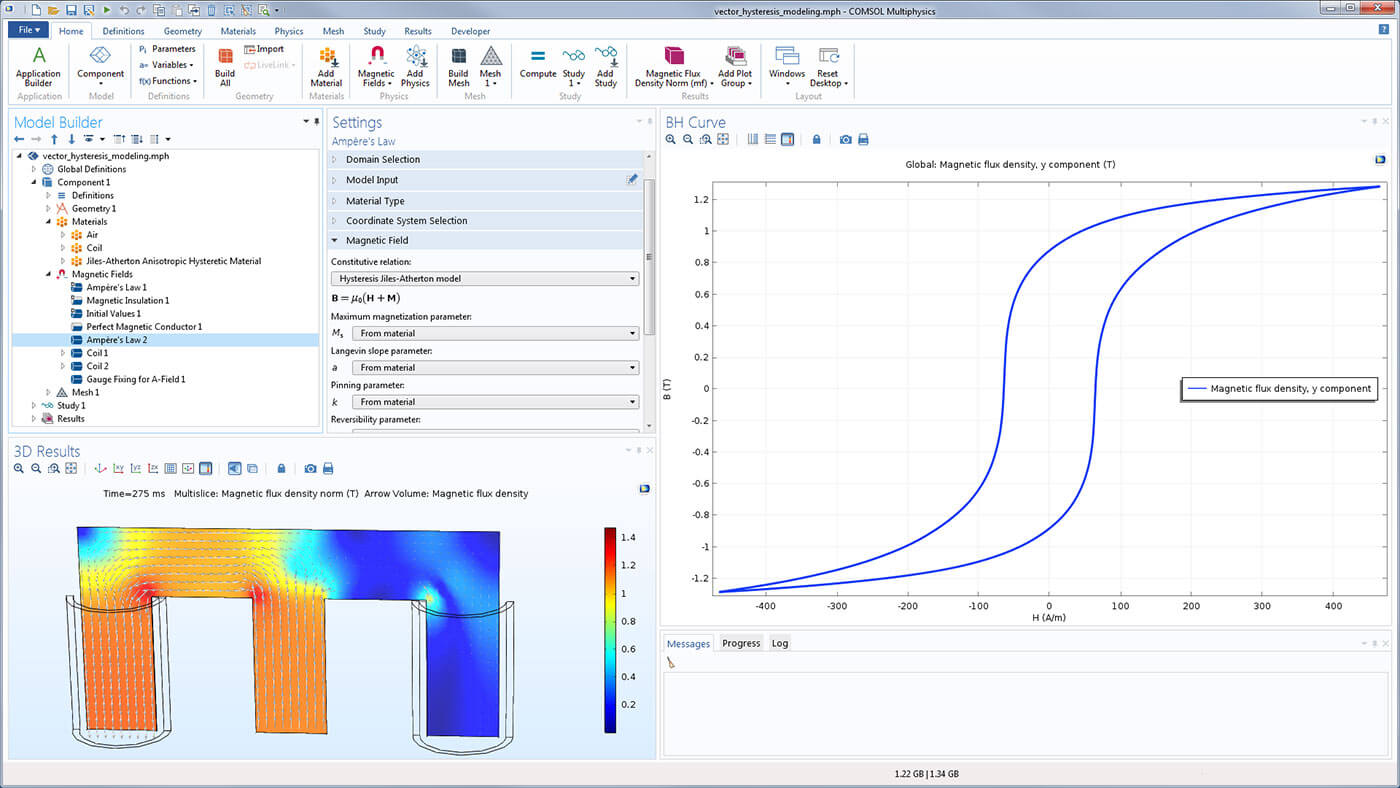 The AC/DC Module offers automatic, semiautomatic, and adaptive mesh generation. Under the hood, the AC/DC Module formulates and solves Maxwell’s equations using FEM, BEM, or a combination of both methods, in concert with state-of-the-art solvers. Several types of finite element and boundary element mesh elements are available.

Numerical methods in the AC/DC Module:

Study types in the AC/DC Module: 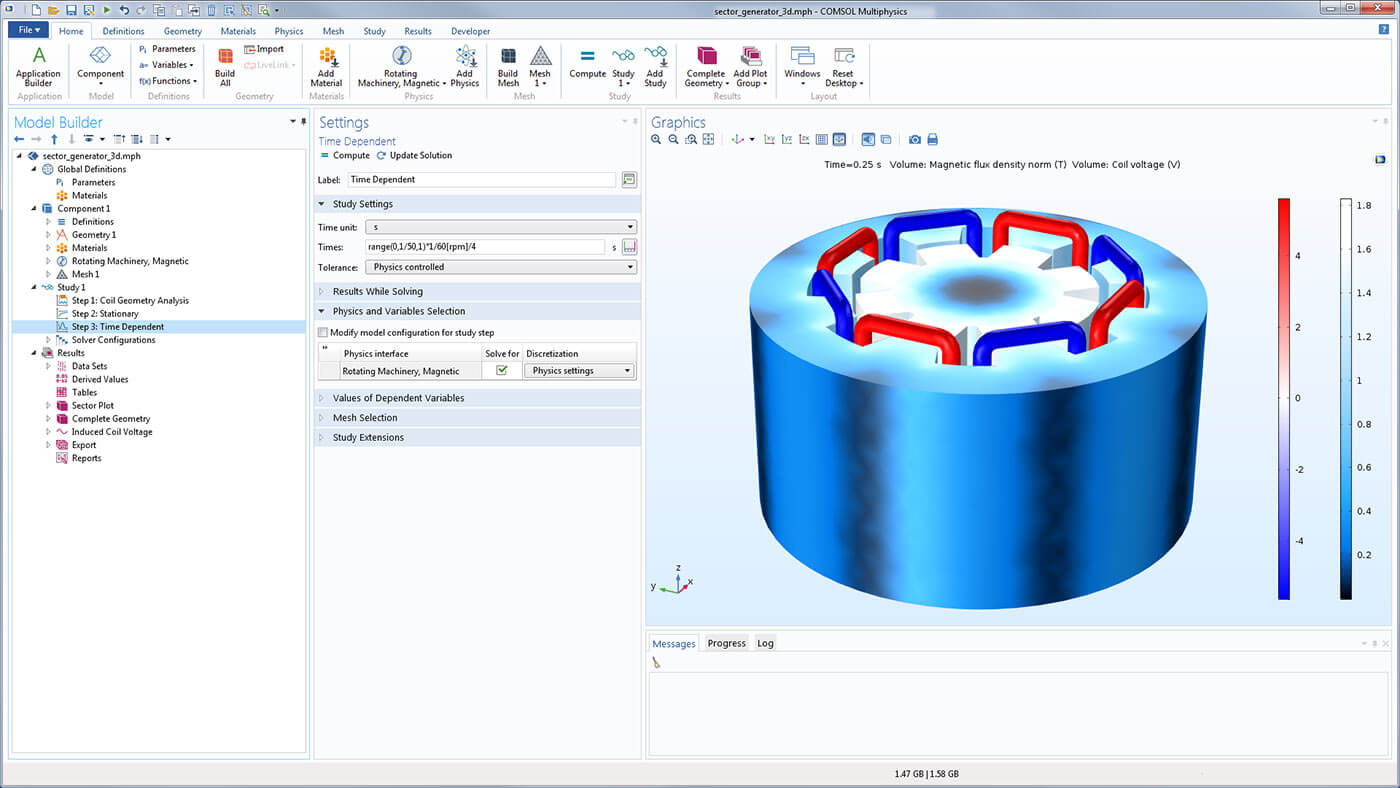 Default visualizations are automatically adapted to the interface you have used and include plots of electric and magnetic fields, currents, charges, and voltages. You can easily add custom visualizations of any field quantity as well as composite expressions of field quantities and their derivatives.

The postprocessing tools can be used to generate lumped parameter matrices, such as capacitance or impedance matrices, as well as integrated, averaged, maximum, and minimum values. For example, you can use a maximum field evaluation to make sure the dielectric strength is not exceeded anywhere in your model, or get the total charge by integrating the charge density over a set of surfaces. By using cut-lines and cut-surface, it is possible to examine the field values on arbitrary cross sections of a model.

Postprocessing and visualization features in the AC/DC Module: 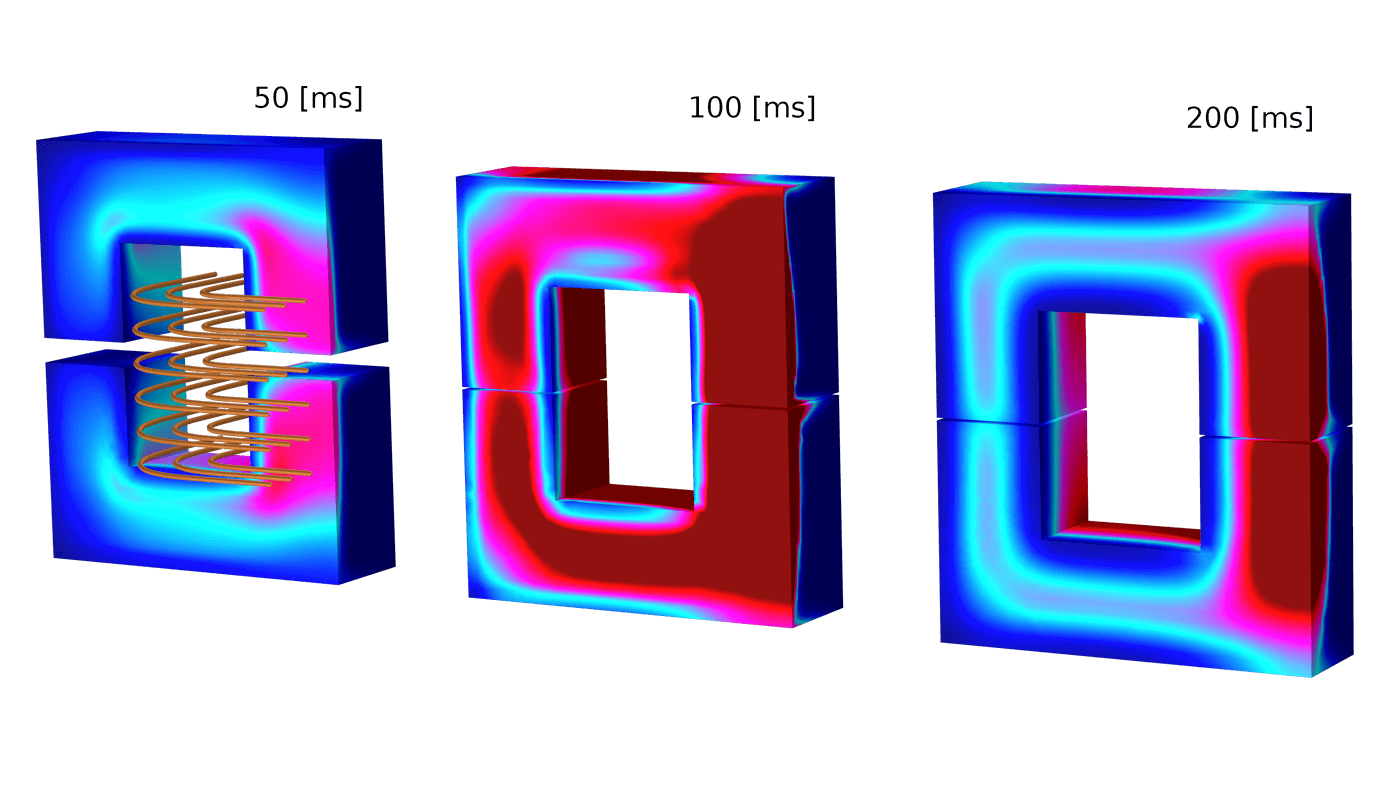 Make your simulation process more efficient with the built-in Application Builder by turning your models into specialised applications with customised inputs and outputs. You can distribute the applications you make to colleagues without simulation expertise so they can perform repetitive analyses on their own, streamlining the design process.

The workflow is simple:

You can expand the capabilities of simulation throughout your team, organisation, classroom, or customer/vendor base by building and using simulation apps. 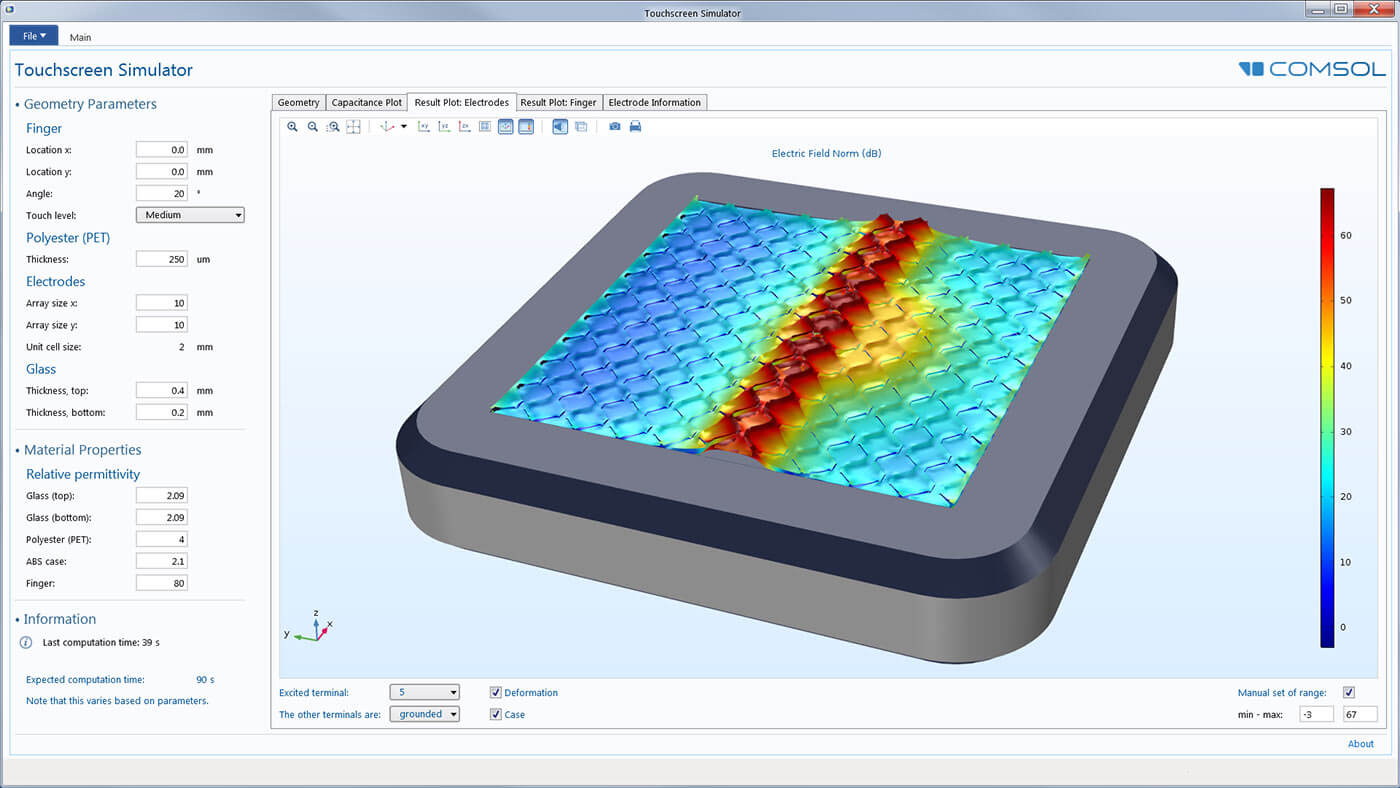 If you use the MATLAB® software, you can easily drive COMSOL Multiphysics® simulations with MATLAB® scripts and functions. The LiveLink™ for MATLAB® interfacing product enables you to access COMSOL® operations through MATLAB® commands and blend these commands with your existing MATLAB® code, directly within the MATLAB® environment.

In order to make it easy for you to analyse electromagnetic properties of CAD models and electronic layouts, COMSOL offers the ECAD Import Module, CAD Import Module, Design Module, and LiveLink™ products for leading CAD systems as part of our product suite. The LiveLink™ products make it possible to keep the parametric CAD model intact in its native environment but still control the geometric dimensions from within the COMSOL Multiphysics® software, as well as produce simultaneous parametric sweeps over several model parameters.

You can also synchronise Microsoft® Excel® spreadsheet data with the parameters you define in the COMSOL Multiphysics® environment via the LiveLink™ for Excel® interfacing product.

View all available interfacing products in the product suite. 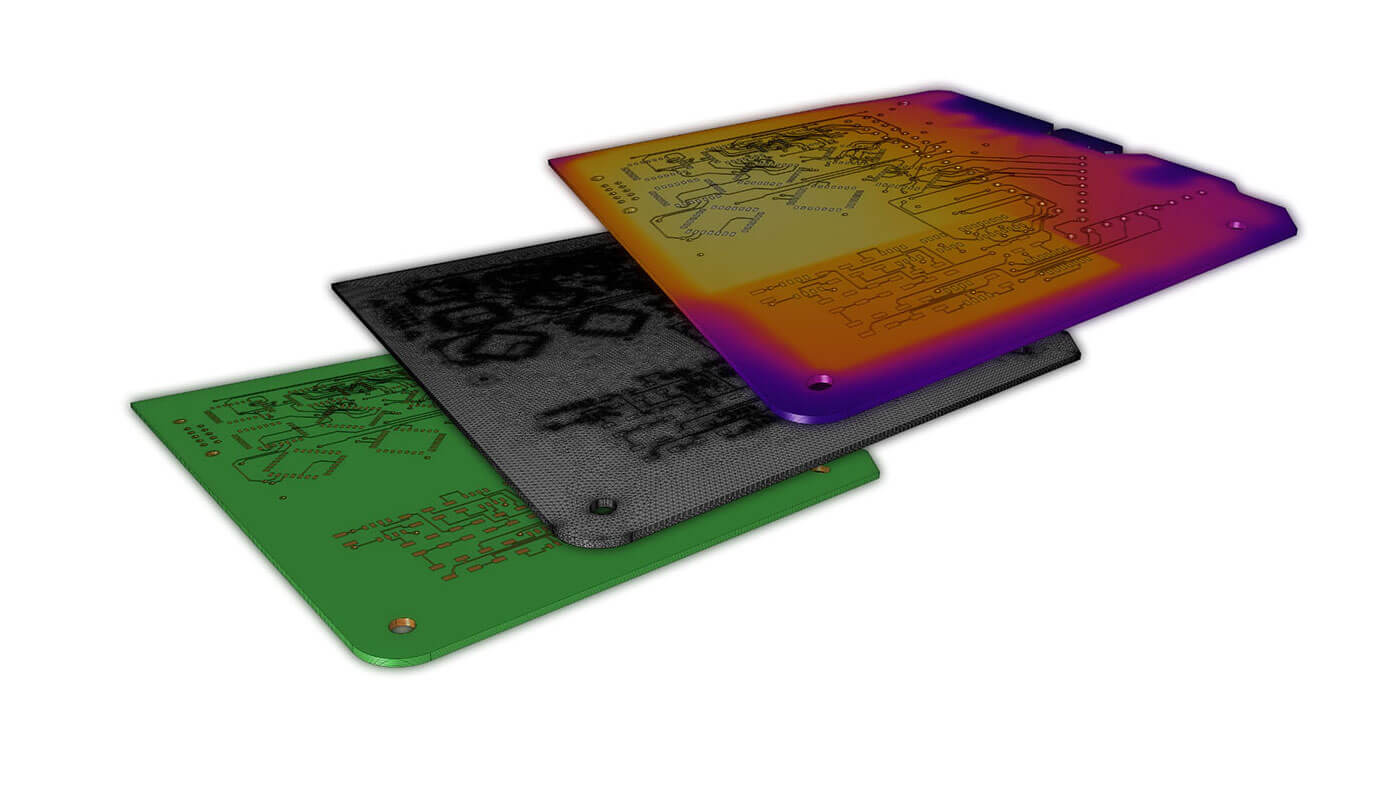 Design Electromagnetic Devices and Systems for the Real World

The products, devices, and components you design for the static or low-frequency range need to operate safely in the real world. For a comprehensive analysis, use the COMSOL Multiphysics® software and the AC/DC Module to see how multiple physics affect your design.

Most electromagnetic components, devices, and products are affected by another branch of physics, whether it be heat transfer, structural mechanics, or acoustics, to name a few. For the most accurate study possible, you can examine a variety of these effects simultaneously. The COMSOL Multiphysics® platform enables you to couple multiple physical effects in one software environment.